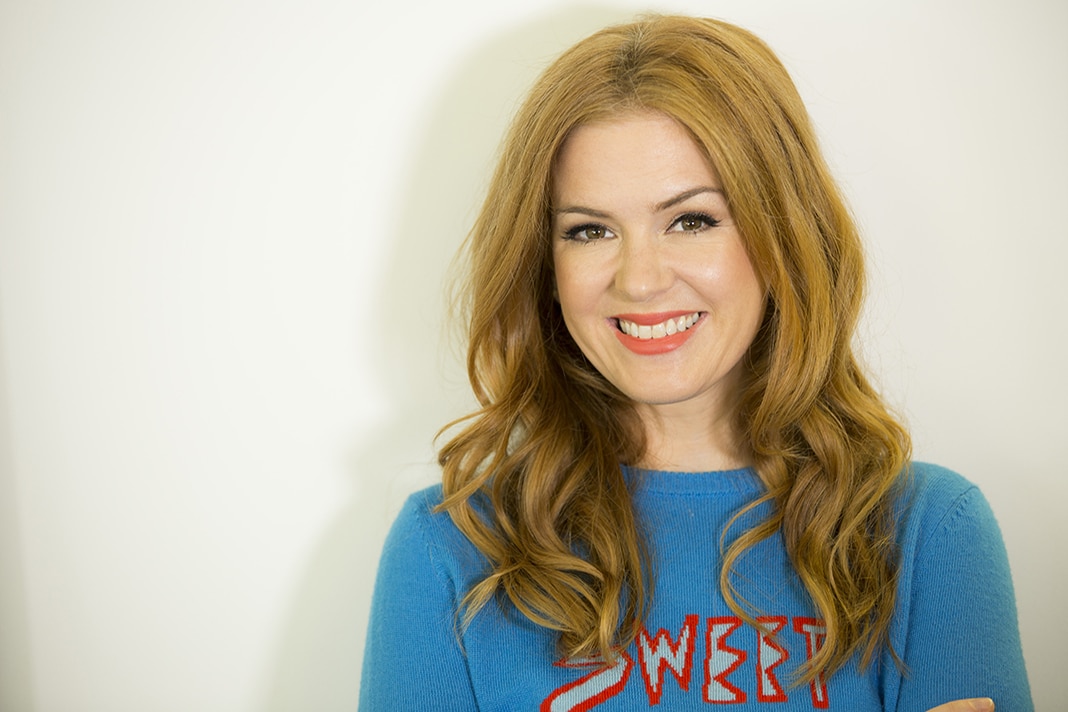 She’s been a bookworm since she was little, and now Isla Fisher has children of her own she’s returned to her original passion

Done? Now, let’s compare notes. Mine are – incredible red hair, funny, Home and Away, Sacha Baron Cohen, Wedding Crashers, big smile. I pondered her height for a while, wondering if Sacha being super tall makes her look smaller than she really is. Then I wondered if her kids were small, who they take after and whether they were big babies at birth and then I spent some time mentally giving props to the ladies who naturally birth ten pound plus babies, because, you know, ouch. There’s a point to my meandering rambles and it’s this – where’s the dirt on Isla Fisher? The list of former boyfriends, spurious asides about her life choices, style, belief systems, the detail of her diet, her red carpet prep, how she feels about turning 40 because of course let’s not forget that a woman over 40 MUST be feeling slighted by an industry that idolises the young.

The shortage isn’t due to lack of interest. Fisher’s IMDB will tell you that she’s barely taken a break in twenty five years – in December 2016 alone she had two major films out – Nocturnal Animals and Keeping Up With The Joneses – as well as a children’s book (more of that later), she’s graced the front covers, talk show sofas and red carpets across these lands and yet she’s managed to stay off the scurrilous gravy train that is the Hollywood gossip machine. White witchcraft? Terrifying publicist? Large payouts? Nope. The answer is simple – Isla just refuses to play the game. Fiercely private and family orientated, you’ll be hard pushed to find any detail on Isla’s life that hasn’t been carefully measured out first and the level of interest in these rare gifts show just how hungry fans are for more – her story about showing her parents around a set when Sacha was fighting a life-sized animatronic elephant’s penis whilst wedged into another prop elephant’s vagina has been repeated more times than a Jamie Oliver recipe.

Get Isla talking about books, though, and she’s… well, she’s an open book. When she was just eighteen and already an established actress in her native Australia, her mum, author Elspeth Reid, suggested she take her love of writing a step further and together the pair produced two young adult fiction books. “It was a lot of fun – until we got to collaborating on the love scenes… I haven’t seen either of those books in 19 years. And that’s a relief!”

Nearly two decades later and Isla Fisher the writer is back, and this time there’s not a love scene in sight. Her latest offering, Marge and the Pirate Baby, is the second in her Marge series, short tales of an anarchic, loveable babysitter who causes mayhem as she leads her charges into and out of scrapes. King of children’s books David Walliams has called them “hilarious” and like Walliams, it’s Isla’s ability to adapt her onscreen comedic flare to paper that make Marge a firm favourite in family homes far and wide.

Though she clearly loves to write, Isla’s return to the craft came as much from a desire to stay sane and keep busy than anything else. “I started writing again because I was pregnant and couldn’t work. So, I could either develop an obsession with gardening, get into Pilates or have a mid-life crisis. I considered all three and then decided to write Marge!” And she didn’t have to look far for inspiration. “If my two best friends had a love child, it would be Marge! One of them is like the eternal Peter Pan – in total denial about reality – and the other tells the most amazing magical stories. The Marge stories are a bit like The Cat In The Hat meets My Naughty Little Sister, two books I love to read with my children. I find kids are used to other kids misbehaving but when grown-ups do it, they find it hilarious. When Marge misbehaves it’s not in an intentional or mean-spirited way, she unlocks the other characters’ creativity.”

With three kids, Olive, Elula and Montgomery, Isla’s used to being surrounded by hustle and bustle so for her, the idea of having to get away from it all to concentrate couldn’t be further from the truth. “Writing is not a solitary thing for me. I’m never completely alone. I have a dialogue with my publisher throughout, and I write in a bookshop. I sneak away at 10am every morning, shove pastries into my mouth and type away. It’s never quiet there and I chat to people, which gives me the perfect excuse to take breaks. [Writing Marge] I ate one croissant an hour and then if I was really stuck I would eat another croissant or if I got writer’s block I would eat a croissant…I probably ate over 2,000 croissants. I also love to write in bed.”

Books are clearly a big part of Isla’s family life and she cherishes the time they spend together reading stories before bed. She’s been making up stories for the kids since Olive was born, and for her “reading is the best kind of escapism…books take tiny people to places they can’t otherwise go – on a pirate ship, inside a peach, through a looking glass. They help children find quiet time, provoke thoughts and discussions, and educate them. They are an integral part of childhood. As a child, Winnie-the-Pooh was my favourite book character. He is adorable – a lovable idiot. I still laugh when I read his lines to my kids, no matter how many times I’ve heard them. A.A Milne is one of my favourite children’s authors, along with Roald Dahl, Enid Blyton and Dr Seuss – the usual suspects.”

Isla’s love of books has even seeped into her choice of roles and when cast in Baz Lurhmann’s The Great Gatsby, she admits the responsibility of bringing the emotionally charged role of Myrtle to life was “nerve wracking”. Despite the nerves, it may not be the last time we see her playing a beloved literary character. “I would love to play Miss Trunchbull in Matilda. If only height wasn’t an issue! Or Lady Macbeth – but I think I would be more likely to be cast as Pippi Longstocking’s mother…”

Her next role might not be pinned down but one thing is for certain; the next time I think of Isla Fisher, the first thing that will pop into my head is a towering pile of books.

Marge And The Pirate Baby by Isla Fisher, illustrations by Eglantine Ceulemans, is available now.