An island paradise for pre-schoolers in Tenerife

(How) does sleep training work?

An island paradise for pre-schoolers in Tenerife 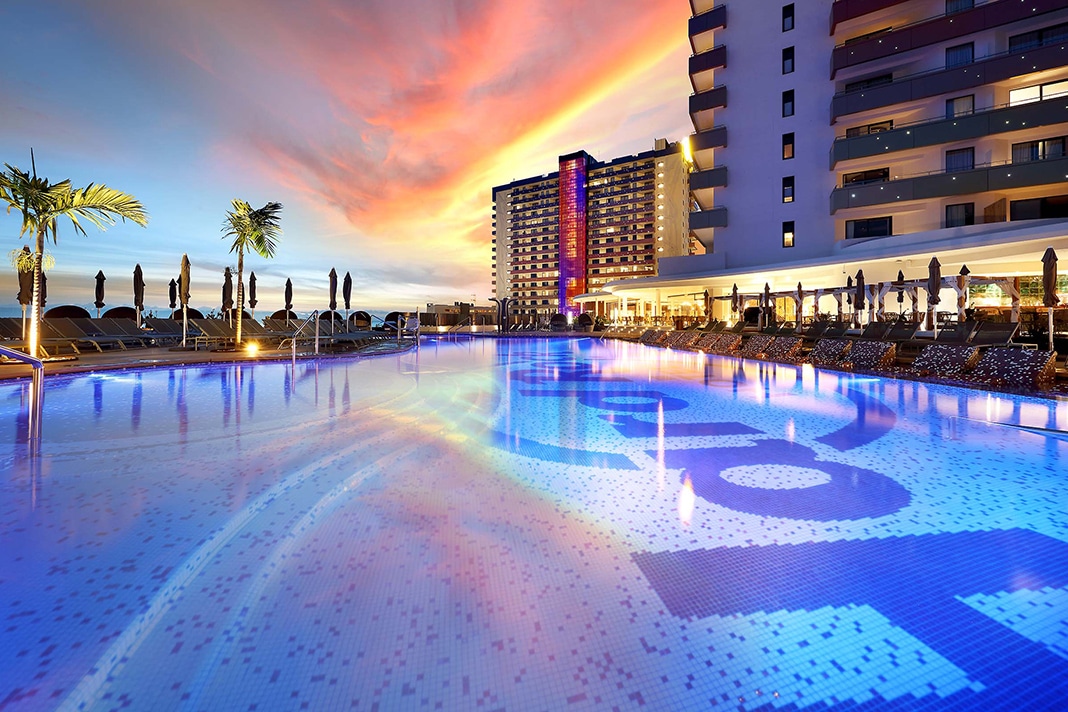 The thought of going on holiday with two young children can be daunting. Which is why our priority for our first break as a family of four was the prospect of childcare facilities on tap, and how we ended up in Tenerife. Not the first place that springs to mind when it comes to a chic getaway.

Thankfully any preconceptions of Tenerife proved unfounded, as we discovered when we arrived at the tranquil resort of Playa Paraiso on the South of the island, home to a glamorous new Hard Rock Hotel. A mere 20-minute drive from the boisterous bars of Playa de las Americas, happily this is a part of the island relatively untouched by tourism.

Its proximity to the coast of Africa means it has some of Tenerife’s best weather year-round. And, as its name suggests, it’s a paradise for people looking for the chance to unwind and soak up some sun. With the main attraction being this family-friendly destination hotel that opened at the end of last year.

Having kids shouldn’t mean compromising on style as the Hard Rock Hotel Tenerife proves effortlessly. We stayed in one of its 265 spacious suites, the hotel has 624 rooms in total. This is five-star luxury at its most relaxed. Our two little boys, aged one and two, were welcomed with open arms and greeted with kisses from staff wherever we went. This came as no surprise as the hotel really raises the bar with its childcare facilities: they have kids’ clubs for children aged up to 16.

But the Lullaby Club really sets it apart: run by qualified nursery staff it’s for littles up to three years old. This was the major draw for us, not least because two hours of childfree time are included in the price of your stay at no extra cost. Judging by the number of families with babies we saw it appealed to lots of other mums and dads too.

As parents of two little ones, we rarely get a moment to ourselves so this was a blessing. It gave us some respite each day so we could enjoy a proper holiday and allowed us the opportunity to reconnect as a couple. Sipping a frozen cocktail in the late afternoon by the adults-only Eden pool bar after dropping off the boys felt decadent. So did a romantic drink watching the sunset from the hotel’s rooftop sky bar, with its captivating views of neighbouring island La Gomera, and Teide, Tenerife’s highest mountain.

On one day I indulged in some much-needed me time at the hotel’s Rock Spa where I had the signature synchronicity massage.  Dining options are limited in Playa Paraiso itself but the hotel has a choice of six high-quality restaurants including a steakhouse and Asian fusion a la carte offerings. At the Mediterranean Ali-Ole we sampled typical Canarian dishes of papas arrugas with mojo, and beef cheeks with a spicy sauce.

Feeding fussy toddlers was a breeze at breakfast: the buffet offers a staggering array of both sweet and savoury dishes. My eldest has lots of food allergies, another source of worry while on holiday, and I was impressed by the selection of choices available to him. He could still have his usual gluten-free toast and cereal with dairy-free milk – an impressive feat. Music lovers will welcome the live performances accompanying breakfast and dinner.

If you can muster the energy to drag yourself away from the hotel complex, one of Europe’s best waterparks is also on your doorstep. Brilliant for older children, the Thai-themed Siam Park boasts adrenalin fueled slides, including the Tower of Power with its 28-metre drop. Although they were too young for the rides our boys were enthralled by the sea lions at the entrance and we had hours of fun in the baby pool.

The hotel boasts its own tiny volcanic sand beach by the Beach Club area but a better alternative for families is Fañabé beach. A free shuttle bus takes you to the exclusive Plaza del Duque shopping centre and from here it’s an easily accessible 10-minute walk. In the end,  we preferred the comfort of taking the boys to the hotel’s heated kids’ pool, after finding babies and sand don’t mix especially well. It was here we spent most of our days. The littles loved the water slide, and many happy days were spent splashing about with the array of water guns and other toys provided.

At the other pools you can find DJs mixing tunes, Bali beds and cool loungers with canopies. The Beach Club, with its saltwater lagoon and house music, was reminiscent of a daytime Ibiza beach party. It also plays host to live concerts and has an open-air stage, with free entry to hotel guests.

Before having children I’d scoffed at the idea of going on holiday and spending the entire time in the hotel. After staying at the Hard Rock Hotel Tenerife I can certainly see the allure.

Monarch offers holidays to the Hard Rock Hotel Tenerife from £469pp for a family of four sharing a studio silver suite in the summer.