10 Things We Love this Christm.. 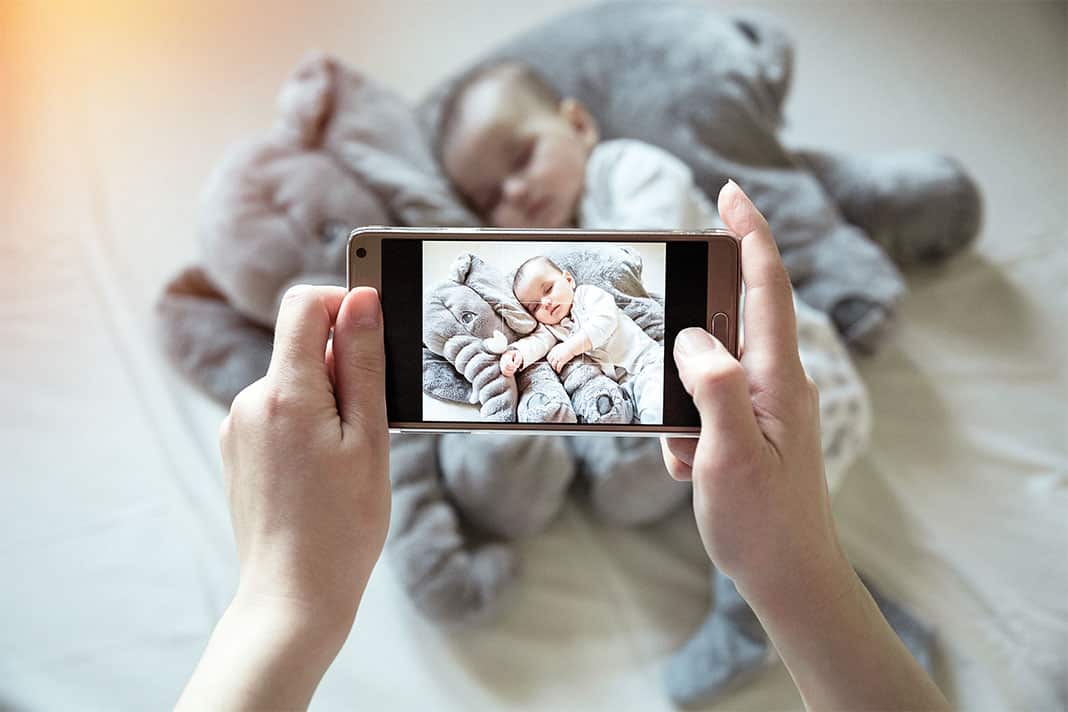 Is social media having a negative effect on how you parent?

We’ve all seen it. At a party the birthday boy or girl is about to blow out their candles. Friends and parents are gathered round waiting to sing. But, before the special moment can take place, the mother hosting just has to turn the cake to a better angle/adjust her child’s outfit/move the kid with chocolate smeared all over their face suitably far away from her little one. Why? For the perfect social media shot of course.

Instead of living in the moment and just enjoying the scene in front of her (which is, in reality, probably pretty chaotic) she needs to halt proceedings, even if just for a minute, to make the shot that little bit more ‘Instagramable’.

So what you might ask? It’s not that big a deal to make everyone wait just a few moments. But once this is applied to everything from birthday parties to holiday snapshots to what you’ve cooked your child for breakfast, suddenly a lot of precious family time is lost.

Indeed experts are now warning that social media use could be far more detrimental to our wellbeing, and that of our children, than we realise.

“When the ‘will to share’ supersedes being present in the moment you know you have an issue,” explains Dr Aaron Balick, a clinical psychotherapist who specialises in social media.

“It is so important to experience what is actually happening around you. If you spend an entire birthday party or school concert taking photos or videos to share, while you might have those to look back on forever, you will remember less of the actual event and how it felt to be there enjoying it. Sometimes it really is better to leave your phone in your pocket.”

While documenting events helps us preserve the memory, recording too much (or indeed all of our lives in some cases) can rob us of the enjoyment of  living in the moment. When it comes to motherhood, this means missing out on actually experiencing the milestones in your child’s life that, frankly, you will never get back.

Dr Balick, author of The Psychodynamics of Social Networking, also believes we shouldn’t underestimate the impact social media use has on our children.

“Children, especially younger children, need recognition. They need their parents to respond to their distress and share in their happiness. It’s crucial for their development,” he points out.

“If when they are telling you about their day or reading their homework to you, you pick up your phone to check a notification, that disrupts that important interaction. By the time they are saying ‘mummy put your phone away’ you know they are really suffering the effects of their parent not responding. There is a time and place to use social media but it’s not when you should be focusing on your child.”

Social media has become the most powerful sharing tool on the planet accessed by billions. 80 million photos are uploaded to Instagram every 24 hours and in the UK alone 30 million people log on to Facebook daily.  Sharing platforms like Twitter, Instagram, Facebook and Snapchat, allow us to connect with others and form online relationships and communities in a way that has never been possible before.

Social media promotes business, enhances communication and has become an invaluable networking tool. But as well as a shopping and advertising vehicle, for parents it has translated into the forming of often very supportive and helpful online communities that regularly spill over into the real world, creating friendships between those who might otherwise never have met.

A recent study showed that 68 per cent of mothers use Instagram regularly with more than half shopping directly from posts.

However, for all these positive connections, there are serious concerns that have arisen. A report earlier this year by the Royal Society for Public Health (RSPH) found that its use is having a detrimental affect on the mental health of young people, with Instagram being named the worse offender. The Status of Mind Report found clear links between social media use and increased rates of depression, anxiety and poor sleep.

Shirley Cramer, chief executive of the RSPH, believes that these damaging effects are not limited to just the under 25s as 70% of people aged 35 to 45 in the UK also use it.

“Social media has been described as more addictive than cigarettes and alcohol, and is now so entrenched in the lives of young people that it is no longer possible to ignore it when talking about their mental health,” she points out.

“But it’s not just the young who are influenced by this,” she continues. “If we are talking about mothers using it then I can see how it could easily have a similar effect.

“We can now spend hours scrolling through carefully curated shots of other people’s worlds that appear to be perfect. Of course this can cause a mother to feel anxious and worry that her life isn’t as great as that of those she sees on Instagram.

“It’s human nature to compare, but it used to be that we could only really do that with those around us. Now we can access thousands of people that we don’t know.”

Indeed it has turned what used to be the relatively private world of parenting into a spectator sport – and a competitive one at that. From the positive pregnancy test and the gender reveal, to the oh-so-perfect baby shower and even the actual birth, every aspect of having children is being shared online. The important announcements that would have once been preserved for an inner circle are now being broadcast to unknown followers all over the world.

Judith Donath, author of Social Machine: Designs for Living Online and professor of Media Arts at Harvard University, thinks one of the biggest issues is that women don’t always paint a realistic picture
of motherhood.

“Looking at another woman’s perfectly photoshopped image can make you feel really low and new mums can be especially vulnerable. Maybe their baby isn’t sleeping or they are struggling to get back into their jeans and seeing these edited images can make them feel isolated.

“Social media can make people show off and encourage competitiveness which isn’t good for anyone. It’s hard to remember that you are often seeing the best bits of someone else’s life and comparing it to your worst. It used to be just celebrities that could manage such styled, idyllic images, but now anyone with a smartphone can do the same.

“Often those trying to project this ideal are themselves very insecure and feel the need to share every detail to prove something to the world. It can be a harmful vicious cycle.”

Yet Donath also believes that social media can, if used in a more honest and supportive way, enhance a woman’s experience of motherhood.

“People can use it to form friendships and connect to others who are going through the same experiences. It’s not all bad.”

Whether social media use has a positive or negative impact on a mother, it is her choice as an adult how she wishes to use it. Of greater concern to many experts is the posting of images of children who have no control over their online identities.

‘Sharenting’ – the term coined to describe the current trend for sharing images of your offspring online – is causing concern that the children are being put at risk.

“We suggest parents carefully consider the impact of posting photos and videos of their children online before doing so,” says Amanda Azeez, Associate Head of Child Safety Online, Innovation & Impact, NSPCC. “Each time a photo or video is uploaded it creates a digital footprint of a child which follows them into adult life. It is always important to ask a child for their permission before posting. For very young children, think about whether they would be happy for you to post or if it will embarrass them later. If you aren’t sure, it’s best not to post.”

The NSPCC also urge parents to think about safety risks. “Make sure that there isn’t anything in the photos or videos which could allow a child’s location or identity to be recognised, such as school logos or signs, road names, or names of clubs that your child attends,” says Azeez. “Turn your privacy settings on and turn off your geo-location settings.”

And it’s not just experts who are worried sharenting has gone too far. Many parents themselves don’t agree with the trend. According to a recent report from Ofcom, the UK’s communication watchdog, 56% said they completely avoided sharenting. Most wanted to protect their children’s privacy. However one in five parents asked said they posted such images at least once a month. And while some will only post the occasional shot, others will blog extensively about every element of their child’s life along with images to illustrate it.

“Parents are really divided about whether it’s sensible to share photos of their children online,” says Ofcom’s consumer group director Lindsey Fussell. “Of those who do share, over 80% feel very confident about restricting who can see those photos, to friends and family,” she continues.

Many of those who do sharent are members of the media savvy generation who have grown up cataloguing their lives on the likes of Facebook and therefore see posting about life as parents as the natural next step. Research by AVG, an internet security firm, claims that more than a third of British children have had images of themselves uploaded to social media by their parents – many infants acquire a digital footprint before their first tooth.

“It’s difficult for an individual to control that information once it’s out there,” says Tony Anscombe of AVG. “When it comes to our children, we’re making the decision to put things out on their behalf, and what seems appropriate now may not be appropriate in ten years time.”

Yet in the Ofcom report only 15% had concerns about what their children might think when they grew up.

For some posting on social media is a way to smugly show off their child’s latest achievement, while others, such as the many parenting blogs, prefer to present a realistic, honest and often funny picture of life with small children, with many mums and dads enjoying bonding over their experience of parenthood.

But one of the most important things any parent can do is set a good example when using social media. Even if your child is very young, they will begin to notice how much time you
spend on your phone and it will become the norm to them.

“Put the phone away at the dinner table, set limits on your own usage and be a role model for your kids,” says Cramer who is taking part in an All Party Parliamentary group being set up to look at the effects of social media onmental health.

“Studies show that taking a break from social media makes people feel more relaxed and happy. Turn your phone off for a while and see what happens.”

There can be no doubt that the like of Instagram and Twitter offer a world of opportunity to mothers to make new friends and access useful information. But maybe we need to be mindful when building these online connections that we don’t miss out on precious time with those who matter the most: our children.