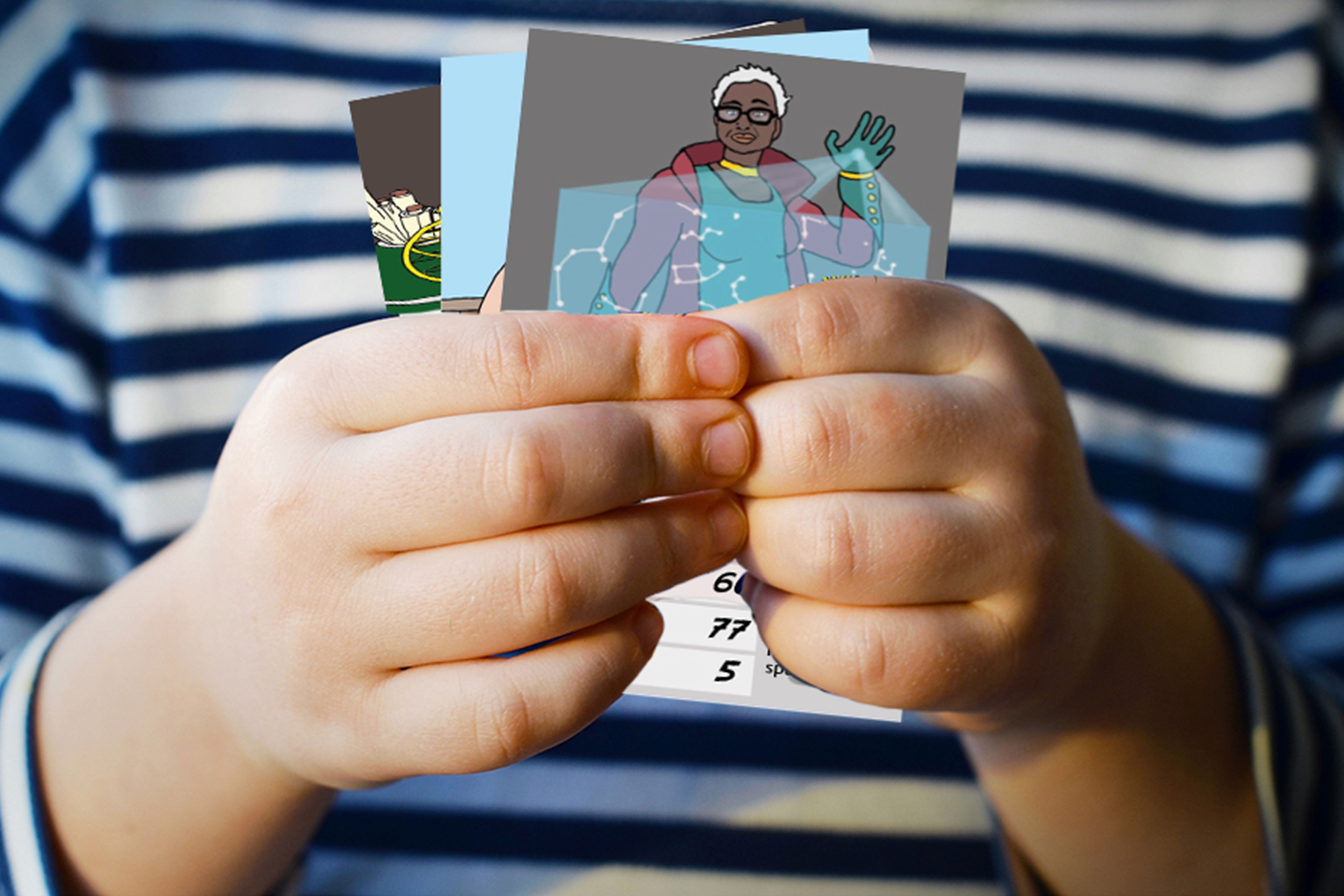 The Remarkablz has developed new twists on traditional card games to help children – especially girls – engage with science and envisage themselves in exciting STEM careers.

Katy Alexander is creating educational games designed to help children aim high – superhero high – and it all started with her daughter’s confusion over whether girls could inhabit the world of science. She says: “We were walking home one day and my daughter asked me if she could be an astronaut – she wanted to know if this was a job that girls could do.” Alexander recognised that her daughter, then aged three, had picked up on a real issue. “If you can’t see yourself in a role you are less likely to engage with or pursue the subject matter”, she says. “Even at the age of three children attach labels to themselves – ‘I’m a girl, and girls do/don’t do that’.”

What made Alexander’s realisation more poignant is that she has a career in STEM herself. She attended medical school (leaving when she decided she was too squeamish to be a doctor) before moving into scientific publishing at journals such as BMJ and Nature. Now she is marketing and communications director at Digital Science, which provides investment and support to cutting-edge science and technology research sectors. Alexander says female STEM pioneers still tend to be overlooked. While people may now know about the work of Ada Lovelace and Mary Seacole, chemist Alice Ball (developer of the first modern leprosy treatment) and physicist Chien-Shiung Wu (after whom the Wu parity experiment is named) have only recently begun to get the proper credit for their achievements. In a blog post for Digital Science, Alexander noted that: “We need to start much, much earlier in helping young boys and girls of any ethnicity or ability to understand that STEM-related professions can be their future”.

As a past Wikimedia volunteer on the regular ‘edit-a-thon’ events that seek to improve the skewed gender balance of biographies on Wikipedia, Alexander had an existing knowledge of lesser-known female pioneers. Her daughter’s comment set her wondering how she could help change the future landscape  – and that’s how The Remarkablz came into being. She has always enjoyed creating art as a hobby, but also the experience of playing traditional card and board games. She began by designing simple cards for her daughter to play with, working in the evenings to create the images and stories around them. She initially envisaged them as trading cards, but over time they morphed into Top Quarkz, a version of the card game Top Trumps.

While it was originally designed just for her family, this custom-made pack of playing cards attracted interest. “Friends with children started asking about it, and we got feedback from parents when we took the cards out with us to restaurants.” Originally she had designed the cards with a muted palette, but she soon realised that children became much more engaged when colours were vibrant, so added a bolder Pop Art style to the superhero portraits. “Whereas adults will be polite, getting feedback from children is tough,” says Alexander. “If they hate something they will throw it back at you!” After around five months’ testing, the prototype went into production. 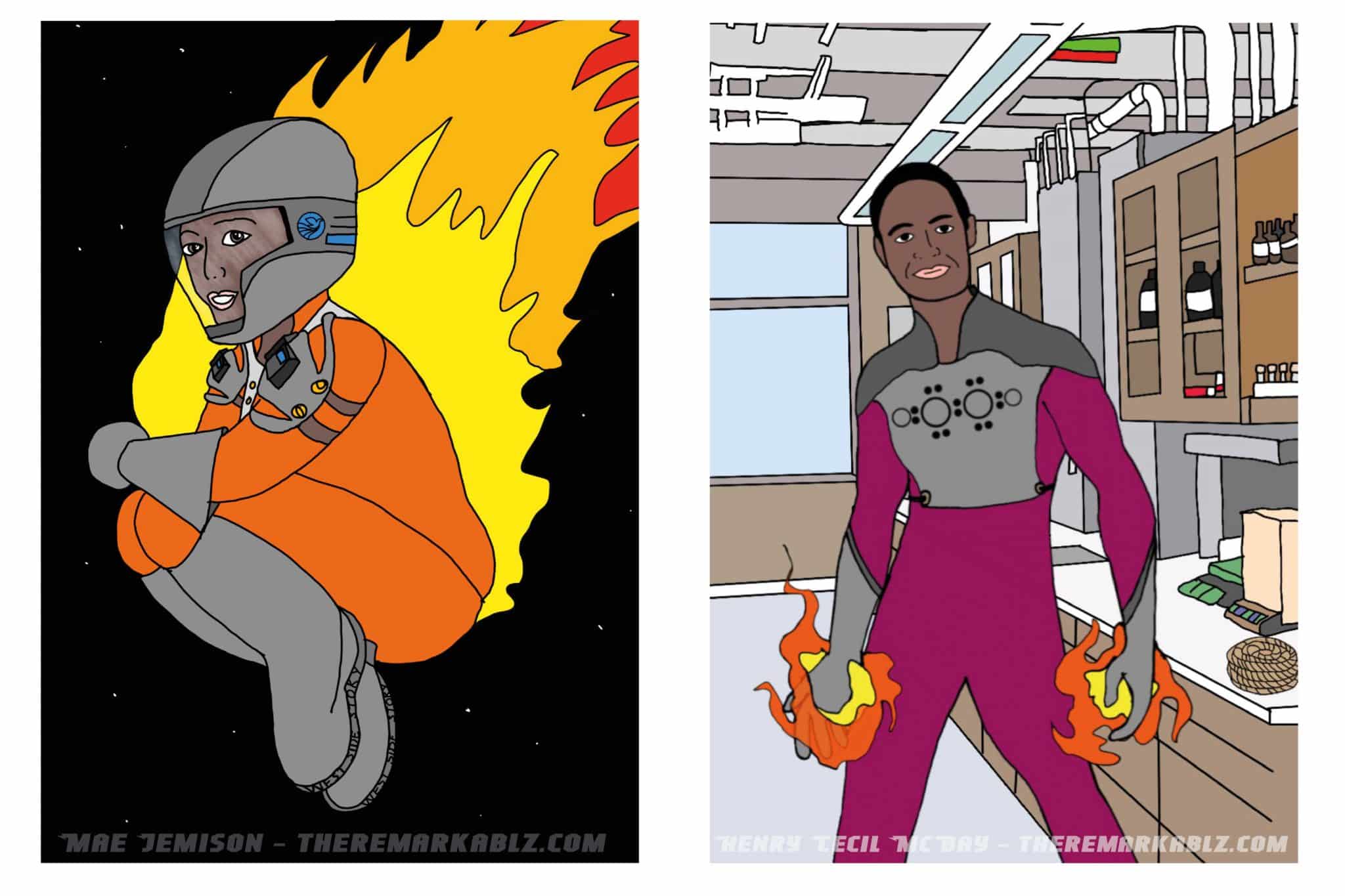 The Top Trumps method of play is maintained in Top Quarkz, so picking the highest or lowest number is key to beating your opponents. Each of the pack’s 40 superheroes is assigned numeric values for scientific field, superpower (Einstein’s superpower is ‘space-time control’, while Mary Seacole’s is ‘empathic healing’), location, sidekick and weakness. The superhero’s weakness can be something related to their field or their life story – asteroids for palaeontologist Mary Anning and horses for inveterate gambler Ada Lovelace.  Four joker-style cards add extra spice – Gluon Superpower Enhancement enables you to win a hand, while the Up Quarkz card lets you skip your turn. Each superhero’s achievements are described briefly on their card and in a way designed to encourage curiosity. Who wouldn’t want to find out more about former London Zoo curator of reptiles Joan Beauchamp Procter, after finding out that she once took a pet crocodile to school – St Paul’s Girls, incidentally – to show to her classmates? While the stories are engaging, Alexander believes one of the game’s chief benefits is that families can play together and on the move.

To fuel the ambitions of would-be space travellers, including Alexander’s daughter, a female astronaut role model is in the mix – the first African-American to travel into space, Mae Jemison. She sits alongside a diverse body of scientists, engineers, inventors and researchers in a gallery stretching from current pioneers to ancient-world astronomers Hypatia and Zhang Heng. Some superheroes in the pack gave us everyday but nonetheless life-enhancing advances. Developer of the first wheelchair-accessible vehicle Ralph Braun is in, alongside the inventor of liquid paper Bette Nesmith Graham.

Cards can be switched around as more current and past pioneers join the Top Quarkz hall of fame. In the meantime, Alexander has developed two further games within The Remarkablz portfolio. Newton’s Rainbow is a colouring book of science superheroes, while Black Hole is an updated version of Old Maid – with a cool space twist and without the spinster stereotype.

Alexander is planning to grow The Remarkablz portfolio still further and believes that parents, scientists and educators need to engage all children in STEM, do it more creatively and start when they are very young. As she put it in a recent blog, we all need to “consider how we can encourage more high quality, diverse role models to inspire the next generation of science superheroes”